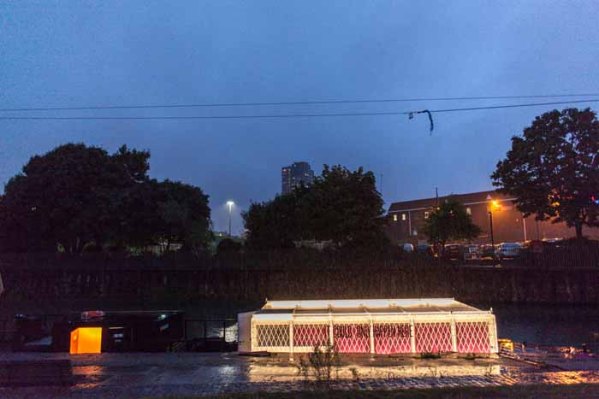 Water Folk (2013) was an Arts Council funded project commissioned by  UP Projects for The Floating Cinema. This inter-generational project enabled children and older people to explore the minute creatures living in the waterways of East London together. Working in collaboration with Professor Malcolm Burrows, a Zoologist from Cambridge University, Tracy & Hobbs used high-speed imaging and animation to reveal the intricate movement and beauty of often insects living unseen in the canal.
Participants came from ‘Rays Geezers’ who are a group of older men from Bow, members of ‘Sharp End’, which is a community group for over 50’s in Hackney, and from year 4 Gayhurst Community Primary School.
Tracy & Hobbs ran a variety of workshops with the groups including boat trips with local Historian Carolyn Clark discussing the history of the canals, they worked with sound artist Tim Olden to record sound under water, they ran pond dipping sessions and a series of drawing and animation sessions. The animation workshops took place with children from Gayhurst Primary School, year 4. The children did close observational drawing, made Zoetrope drawings, flip book animations, they painted on frames from the high-speed films and tried painting onto film stock.
The engagement, participation, discussions and animation all contributed to a 4 minute film which took the audience on a journey from the waterways and through the lens of the microscope to view the water dwelling insects in a new light. The project culminated in a participatory event. Watch ‘Water Folk’ here.

A documentary recording the project here.  The project involved 50 participants and had an audience of 300 to screening and events, which took place on The Floating Cinema during the summer of 2013. The project had a much larger online audience of 100,500 people.


Malcolm Burrows discusses his paper on Mechanical gears and his involvement in Water Folk here.